Floods in and around Kennnington – January 2014

Every so often the History Society has a truly exceptional talk and the November Meeting was one such. You would have to say that title of Local Historian, Liz Woolley’s,  illustrated talk ’The Late Victorian and Edwardian Industrial Buildings of Oxford’ gave no clue to the treat this event was to be. Liz has spoken to the Society several times before and her contributions have always been of a high standard but this talk was perhaps her best. Most people know all about Oxford’s famous historic university buildings but Liz introduced us to a very different Oxford, highlighting the buildings which originally housed the City’s early utilities, that of the Gas Works, of Electricity Generation and of the Water Works. She added the sites of Oxford’s many Breweries together with other prominent buildings used by many diverse industries, including of course the early factory of the famous pioneer of the car industry, William Morris.

As we go to press Members are looking forward to something new, a ’Book Browse’ when Graham Kirby ACIB will be bringing 3 crates of books which are recommended for researching and recalling Local and General History. This event is a bit of a departure for the Society but given the season it should be interesting to see a good selection of useful books which could make appropriate Christmas presents. Report next month. 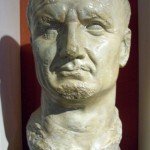 The first event of the 2014 Season will be held on Monday the 20th January 2014 at 7:45pm in the Methodist Church when popular previous speaker, Martin Way, will give an illustrated talk entitled ’Britain Under the Eagles’ : The Story of Roman Britain.

The next event will be the Society’s Annual General Meeting which will be on Monday the 16th February 2014 starting at 7:45pm. The formal part the Meeting will be followed by a Members’ Evening when any Member can give a short talk on anything of an historic nature. If you are interested in participating please contact the Chairman.

By the time you are reading this Members should have received their copy of Times Past, the Society’s Newsletter. Enclosed will be copy of the Programme for 2014 and details of how to pay Annual Subscriptions which are due on the 1st January 2014.

Permanent link to this article: https://kennington-pc.gov.uk/history-society-report-december-2013/