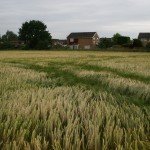 In December we were treated to a real lesson in local history.  Richard Dudding a former Local Government Officer told us about the history of land use in Radley from the dissolution of the monasteries in the 16th century to the early 19th century.  In his talk entitled “Radley, Gentry, Yeoman and land” he showed us how agriculture and related industries changed from the mediaeval strip system with commons together with changing patterns of land ownership to the enclosed farmland fields which we still largely have today.  It was most interesting.

At the time of writing we are looking forward to a talk entitled “Buildings of Berkshire” by Professor Geoffrey Tyack.

Permanent link to this article: https://kennington-pc.gov.uk/history-society-report-january-2016/